The Ground is Falling

Aranya Art Center is pleased to announce the upcoming exhibition, The Ground is Falling, featuring artist Xin Liu, curated by Iris Long. This will be Xin Liu’s ﬁrst solo exhibition in mainland China. 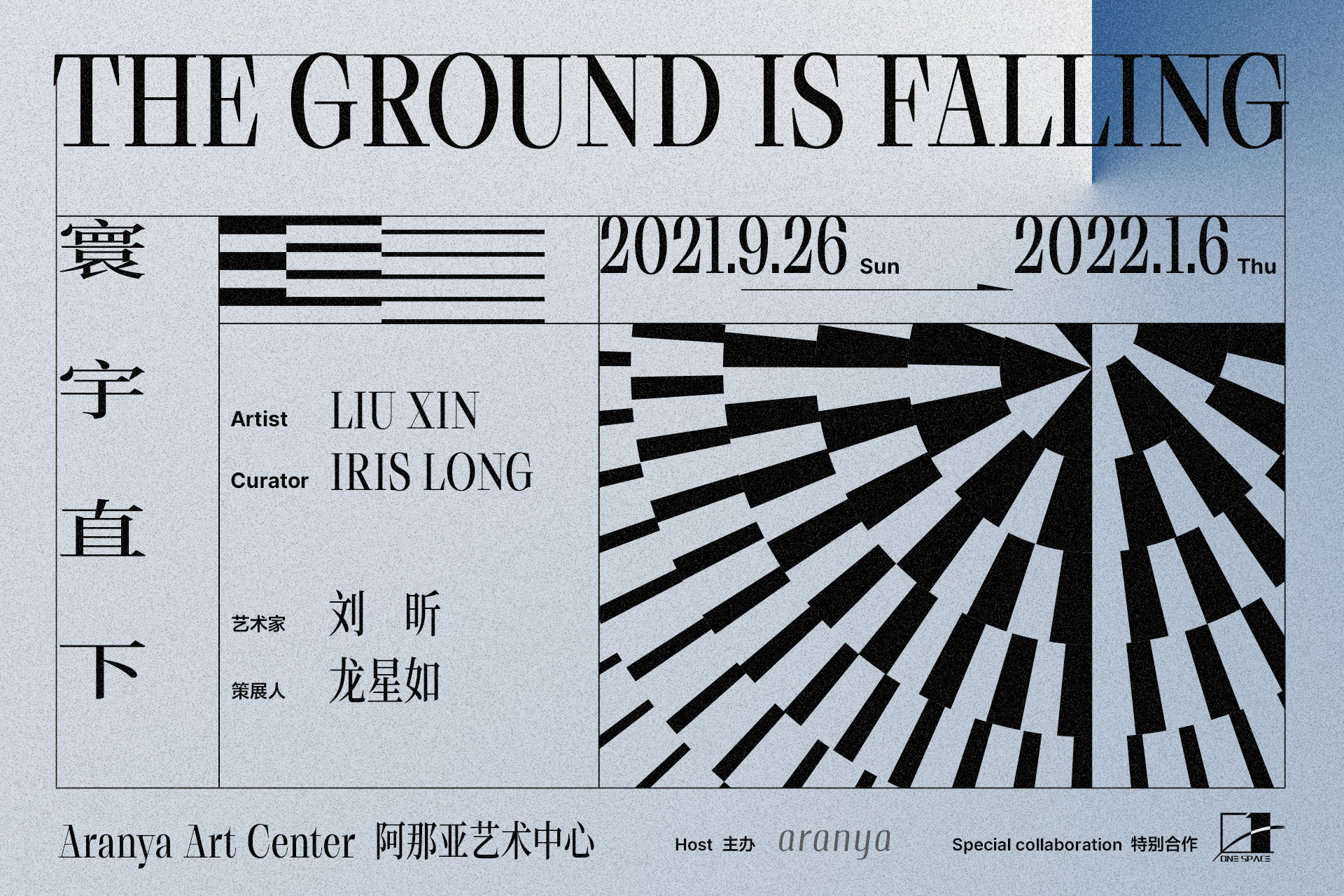 Nothing is closer to our vision of the connection between human and non-human worlds than the cosmos today. That vision encompasses the perspectives of Russian cosmism, in which the universe resurrects and even immortalizes the past discussions of planetary engineering (Hansen, Bratton); and the many feminist ecologists reconsidering the bonds and legacies of being “more than human” in the cosmic past, present, and future, building a profoundly ethical sensibility rooted in reverence. This universe,loaded with visions of eternal life, faith in engineering, and a new ethics of species, is tending toward the ultimate or extreme in multiple ways.

In a sense, we seem to have completed not only the continuous metaphysicalengineering project that is “the world as a sphere” (Yuk), but also thephysical civilizational expansion that has followed the curve of that sphere.Over the last half-century, we have already witnessed the overview effect, symbolized by the blue dot, and seen the full reflection that BuckminsterFuller projected onto the Earth’s spherical structure. Perhaps now we ought to consider what lies beyond the overview and the blue dot—a planetary existence that can no longer be fully described as “spherical” and can no longer be limited by a vision of what’s out there. To some extent, the“outside” could disappear at any moment. While Blue Origin and SpaceXhave driven interest in human spaceflight, and even sparked bold statementsabout a new Space Age, the development of precision cosmology has further explored dark matter sitting silently in the void.

In the deep space narrative, the flames of rocket boosters and high-energy cosmic rays entangle the obvious and the hidden, the surface and the interior. The exhibition attempts to explore a non-vertical, topological perspective towards the universe. In her long-term projects, Xin Liu has situated herself on the boundary line between celestial objects, experiences of deep space, the cosmic ecosystem, and many other topics, as well as within continuous translations of vocabularies from multiple disciplines.

Within this exhibition, Liu retains her usual working methods developed around mapping, modeling, and precision instruments, and also constructs three narrative threads that run through the exhibition space: a potato seed that was transported to the International Space Station via manned spaceflight, an anonymous “white stone” from the sky, and a series of satellite signals radiating between the Earth’s orbit and surface. They all seem to be in motion: the instruments are rotating, the potato is sprouting, and the fallen object is rumbling. The pieces of technology, plants, debris, soil, shadows, and humans that appear in the exhibition seem to be governed by an unspoken, overarching rule, regardless of whether this can be called “the cosmos.” This invisible, overarching energy has more primitive associations and unfolds in a spiral circumscribing the exhibition’s verticality. Flying above the ground could mean taking an expedition, or it could imply going into exile, while falling into the Earth’s core could be a return to orbit. The one-way vertical universe is confronting an epistemological reorganization.Beyond the upper bounds of engineering and the limits of mechanics, the political, technological, and cultural power projected into space constructs another kind of deep time that extends into deep space. It forces us to reconsider everything that we have inscribed or woven: people, fragments, signals, space minerals, and various suppositions and deductions in space.The dimension and speed of deep space narratives are being gradually dissolved into more diverse, poetic, entangled, and internalized forms, which may allow cosmic engineering and cosmic metabolism to achieve henosis(oneness). What the exhibition projects is simply one version of many potential narratives; it is condensed into a specific deep space that one human body is narrating. Here, the whole world falls straight down. 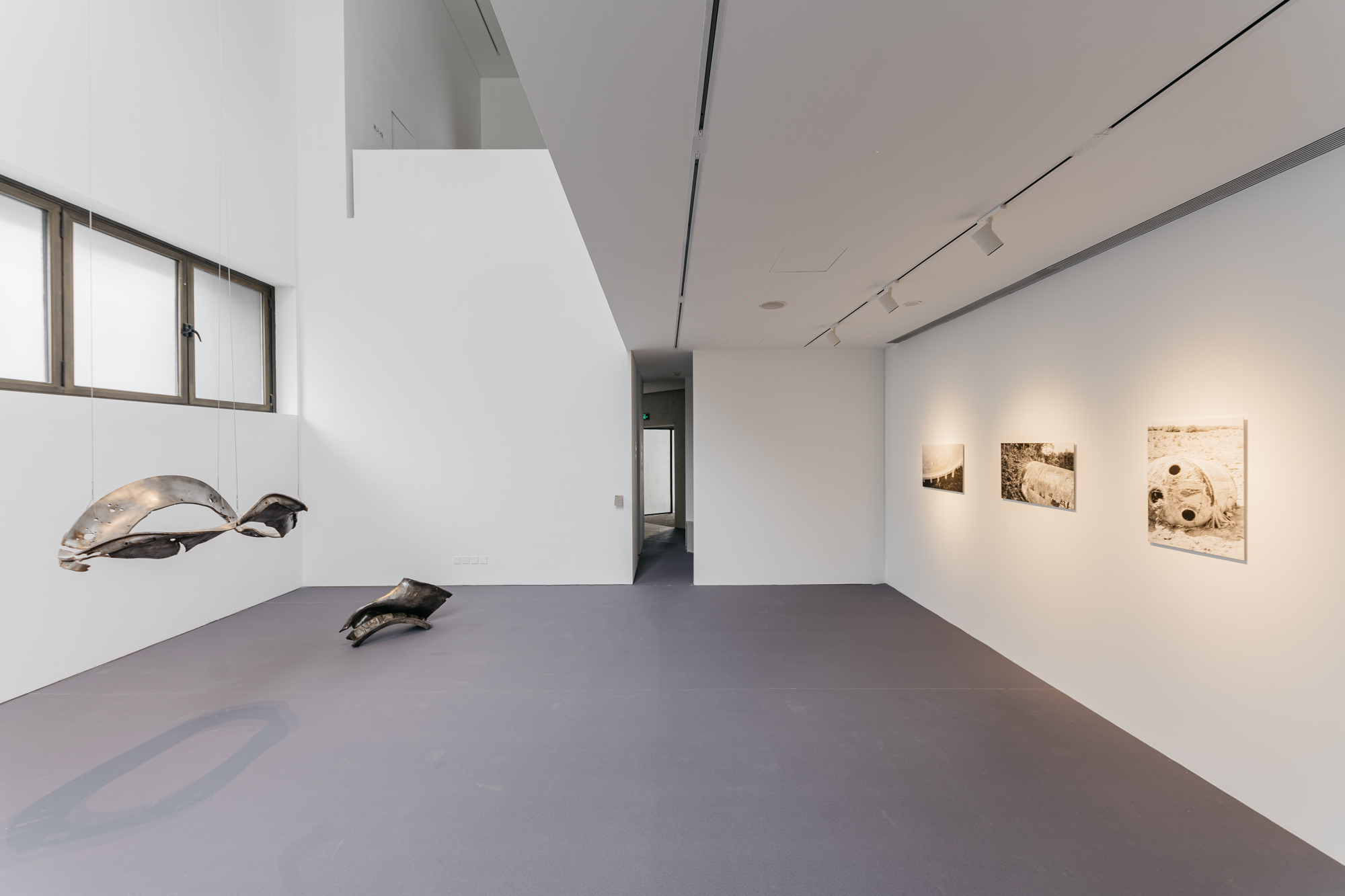 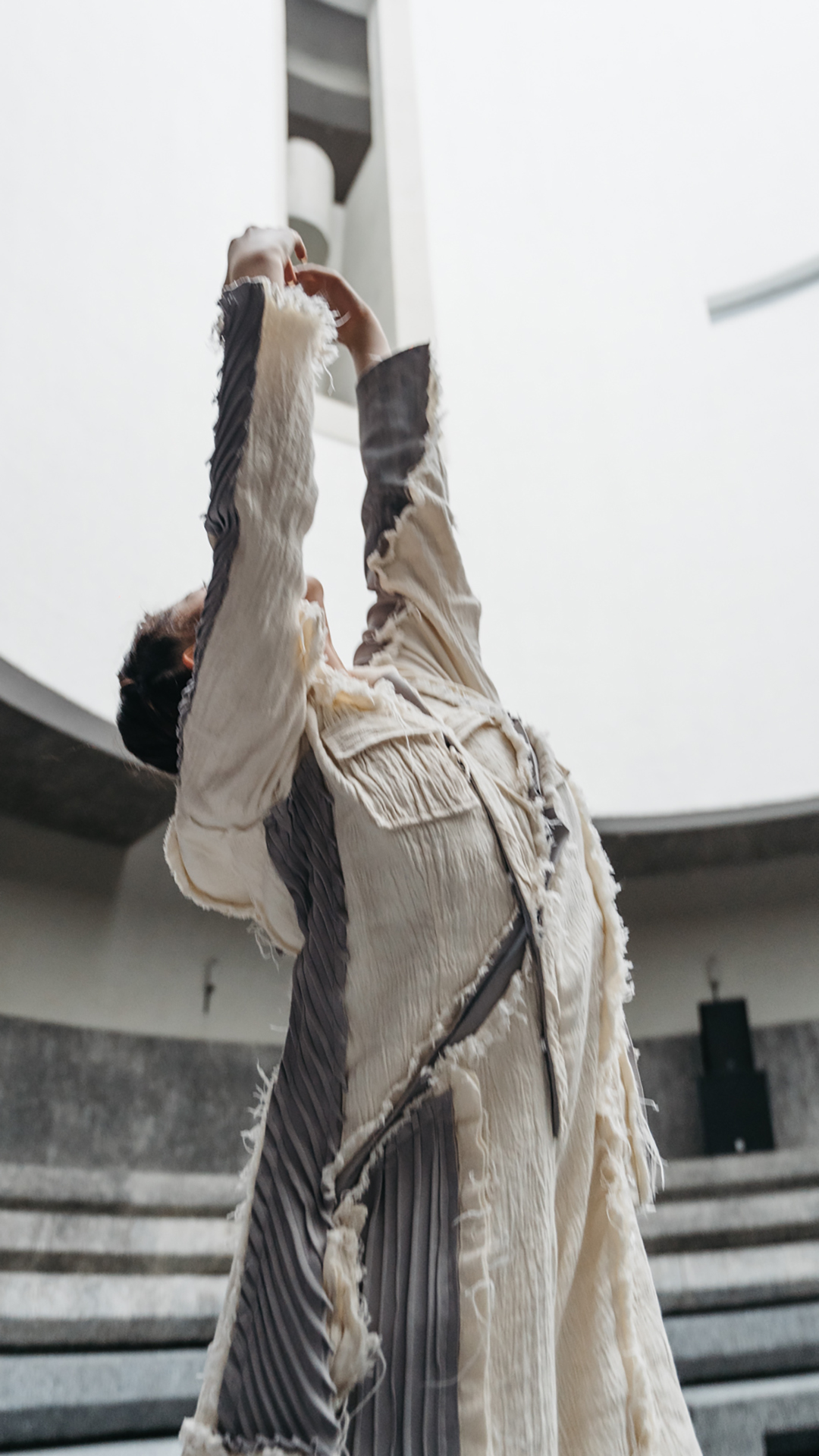 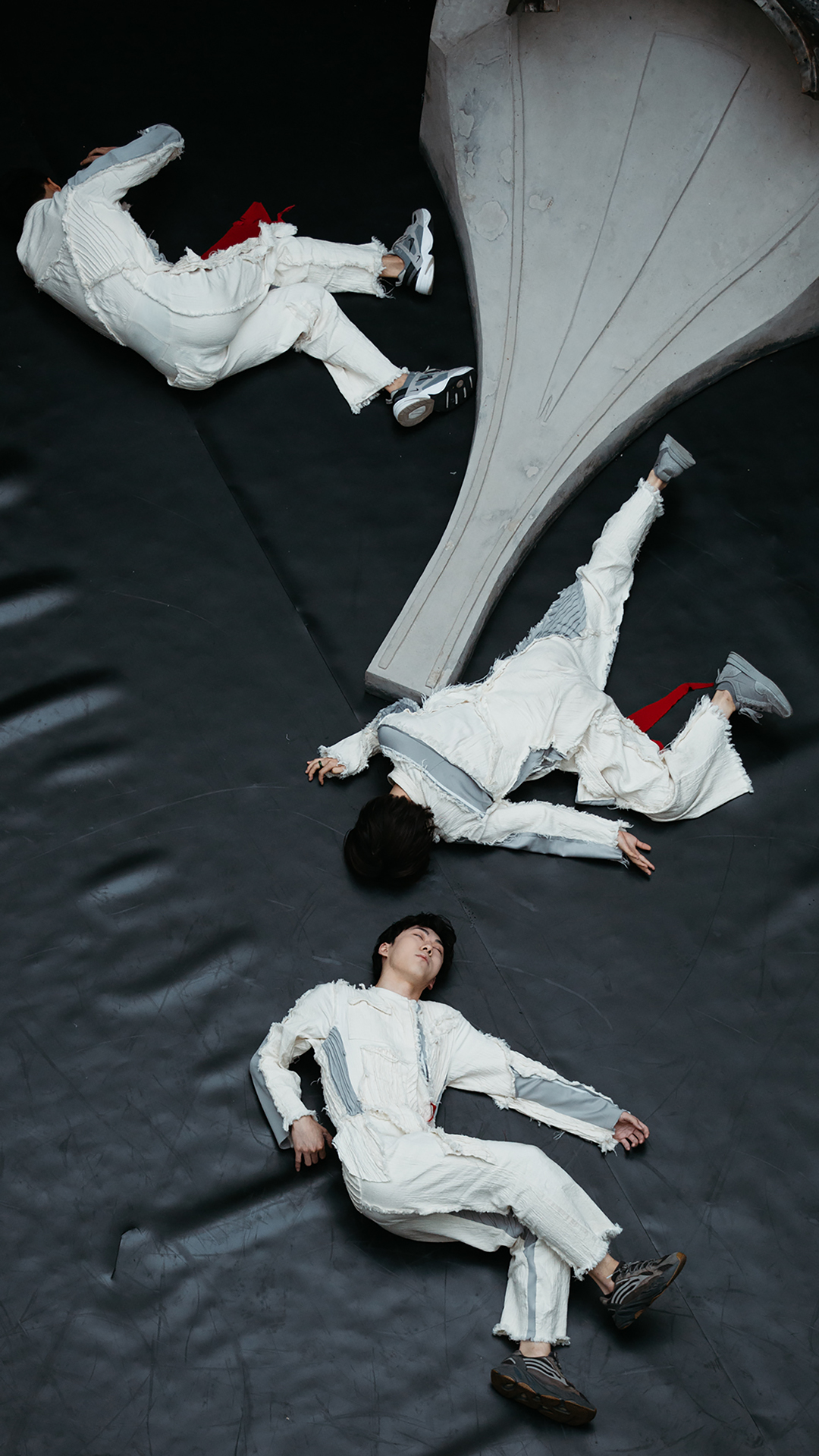 Xin Liu (b. 1991, Xinjiang/China) is an artist and engineer.
In her practice, Xin creates experiences/experiments to take measurements in our personal, social and technological spaces in a post-metaphysical world: between gravity and homeland, sorrow and the composition of tear, gene sequencing and astrology. She examines the discourse-power nexus as an active practitioner, an experimenter and a performer. Her recent research and interest center around the verticality of space, extraterrestrial explorations and cosmic metabolism.
Xin is the Arts Curator in the Space Exploration Initiative in MIT Media Lab, a member of the inaugural ONX studio program founded by New Museum andOnassis NY, and a member of the Silver Art Projects in World Trade Center.She is also an artist-in-residence in SETI Institute. She is recipient of numerous awards and residencies, including Forbes 30 under 30 Asia, X Museum Triennial Award, the Van Lier Fellowship from Museum of Arts andDesign, Sundance New Frontier Story Lab, Huayu Youth Award Finalist,Creative Capital On Our Radar, inaugural Europe ARTificial Intelligence Labresidency with Ars Electronica, Queens Museum Artist Studio program, NewINC incubator and Pioneer Works Tech Residency. She has been commissioned by institutions including M+ Museum (Hong Kong), Ars Electronica (Austria), Rhizome (USA), Media Art Xploration Festival (USA),Onassis Foundation Enter Program (US) and Abandon Normal Devices

Festival (UK). She is an advisor for LACMA Art+Tech Lab and a faculty member at The Terraforming, a new research program at Strelka Institute in 2020. Xin graduated from MIT Media Lab with a master degree in Media Arts and Sciences after her M.F.A from Rhode Island School of Design and B.E from Tsinghua University in Beijing (Measurement, Control Technology, andInstrument).

Iris Long is a writer and independent curator. She currently works as are searcher on art, science, and technology at the Central Academy of FineArts, with a research focus on how art responds to the current global reality of ubiquitous computing and big data.

She was shortlisted by the first M21-IAAC Award (International Awards for ArtCriticism). Her translation work, Rethinking Curating: Art after New Media, received a nomination from AAC Art China awards in 2016. In 2018, she was the recipient of Hyundai Blue Prize for curators. In 2019 she curated “LyingSophia and Mocking Alexa”(Hyundai Motor studios Beijing), The ThirdSession of “Future of Today”: Deja Vu (Today Art Museum, Beijing), and“Mind the Deep: Artificial Intelligence and Art”( McaM, Shanghai). She co-curated the opening show of UN Art Center, “The Kind Stranger” and “LatentLandscapes”. She is also the art jury of ISEA 2019, and the art jury of SIGGRAPH ASIA 2020.

Her research work has been presented in “Art and Artificial Intelligence”(Open Conference, ZKM), “Korea Research Fellow”(MMCA), “Art Machines:International Symposium on Computational Media Art (ISCMA)”(Hong Kong),International Symposium on Electronic Art and Digital Research in theHumanities and Arts and ISEA. Iris has a master’s degree in Critical Writing inArt and Design from the Royal College of Art, the UK, and a bachelor’s degree in Journalism and Communication from Tsinghua University, China.